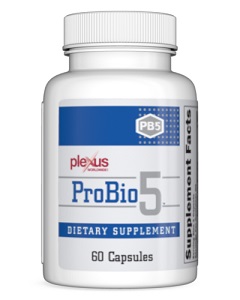 Viability: through/ at time of manufacturing

With a general score of 3/5 stars, Plexus ProBio5 ranks a little bit above the average position for a daily usage probiotic as a result of both its obvious advantages and less pleasant drawbacks.

Such elements have been demonstrated to highly improve both digestive and immune functions within the organism. As a consequence, a well-nourished body will translate into higher energy levels, better weight management, and generally more stable moods.

The fact that the only other ingredient besides these organic components is water makes ProBio5 a health and wellness-oriented supplement from the start.

Many companies resort to numerous additives and fillers in order to help stabilize the probiotic component in their supplements, but this does not seem to be the situation with ProBio5.

In fact, the label actually states that you do not need to refrigerate the product after opening it, making the present dietary enhancer great when you want to travel and still get a good digestive boost at the same time.

Nevertheless, there are some aspects which lack in quality regarding ProBio5. For example, the packaging recommends taking between 1 and 4 capsules each day with a meal or before going to sleep, with the latter administration option being both rather excessive and definitely out of an accessible price range.

With $0.58 per capsule ($34.95 for each 60 capsules bottle), this probiotic enhancer can quickly surpass the average supplement pricing (~$0.70) and ‘burn’ a hole in your wallet quickly enough.

Another disadvantage is represented by the fact that the probiotic colonies are only guaranteed as being viable and active up until the manufacturing time.

This somewhat implies that less than ideal handling or storage conditions can damage the product’s CFUs count, resulting in less or – in extreme instances – none of the 2 billion microorganisms promised being actually delivered to your gastrointestinal system during the administration period.

The best scenario would be to have a probiotic guarantee extended to the expiration date stated on the bottle, but unfortunately, this is not the case with ProBio5.

Speaking of the supplement’s composition, you should also know that ProBio5 does not behave all that satisfactory with regards to allergy concerns either.

All in all, Plexus ProBio5 scores a slightly above average review of 3/5 stars as a result of its interesting formula and selection of probiotic strains.

The downside is that Plexus ProBio5 costs too much to be effectively used as a daily probiotic booster, as well as containing a number of allergens and not guaranteeing microorganism efficiency past the manufacturing date.

Unfortunately, Plexus ProBio5 does exhibit a rather elevated allergenic potential. Aside from its probiotic, enzymatic, and vitamin ingredients, the present supplement also contains brown rice powder, yeast, and gelatine.

These substances have been shown to negatively influence sensitive or allergic individuals, so caution is definitely advised in this sense.

If you have a history of unwanted reactions to either of these ingredients, then try to find an alternative to ProBio5 as your daily probiotic enhancer so as to avoid future medical issues.

On the other hand, this supplement contains no other additives or fillers, which is the ideal case for any good probiotic enhancer that claims to be wholesome for the body in the true sense of the word.

In fact, the only other component aside from the ones already mentioned is water, an overall formula which definitely brings ProBio 5 higher up on the supplement quality scale.

Every bottle of Plexus ProBio5 will cost you 34.95 for 60 capsules, namely $0.58 per individual capsule. Compared to the average price of a good probiotic enhancer – approximately $0.70 – this is a very advantageous pricing range for each individual serving, more so when we take into account the probiotic cultures (5 distinct strains) and CFUs count (2 billion microorganisms).

Even so, the ‘suggested use’ recommendation of the label states you can take up to 4 capsules of ProBio 5 for a more potent effect, which of course raises the daily investment to way above the normal pricing range of such a supplement.

So, if you were to take the maximum dosage, then your regular investment would amount to $2.33, which is definitely highly expensive for this type of supplement, at more than three times the normal cost of other similar products currently available on the market.

As a result, the price of Plexus ProBio 5 can range from very inexpensive to less affordable – it all depends on your dosage of choice.

Another important advantage of ProBio5 is the fact that you will not experience any sort of side effects during the entire time of administration.

As you might already know by now, the beginning of any probiotic treatment can be a little bit tricky on the gastrointestinal system.

Why so? Well, because introducing a new number of bacterial colonies can cause an initial imbalance within the gut, once which leads to unwanted symptoms like visceral pain, bloating, gas, and even nausea.

Luckily, the 2 billion CFUs contained by ProBio 5 seem to be mild enough so as to not result in this sort of side effects all throughout the utilization period.

This is definitely a big plus for the probiotic supplement because it implies that the capsules are both safe to use and efficient.

Unlike other probiotic manufacturers, Plexus offers a 60 days money back policy in the case that you go through an unsatisfactory probiotic experience.

This implies that you can return the unused capsules, alongside with the original packaging, within 15-60 days of purchasing and receive your investment back in full.

The only minor setback would be having to pay for the S&H (shipping and handling) costs yourself, but it still remains a great deal for the supplement in question when considering that many other companies do not offer such a refund in the first place.

Where to buy Plexus ProBio5?

You can purchase Plexus ProBio5 through the company’s official website.

5 Comments on "Plexus ProBio5 Reviews | Does it Work or Scam?"